HOW MARIJUANA HAS CHANGED OVER TIME

The Indian hemp plant (from which cannabis drugs like marijuana and hashish are made) was grown for use as a hallucinogen more than 2,000 years ago. 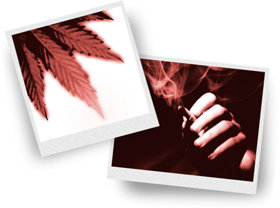 By using modern techniques, hemp growers have developed types of cannabis that have much higher levels of THC than in the past. The average strength of the marijuana plant in the U.S. today is around 15–20%. The highest level found in the plant is around 32%.12

Increase of THC in marijuana over time

The more THC, the more psychoactive the drug and the higher the potential for abuse, addiction, and other harmful effects.

Is smoking a joint the same as drinking alcohol?

You decide. Here are the facts:

Alcohol consists of one substance only: ethanol. Marijuana contains more than 400 known chemicals, including the same cancer-causing substances found in tobacco smoke. Unlike cigarette smokers, pot smokers tend to inhale deeply and hold the smoke as long as possible to increase the effect of the drug, worsening the damage to the lungs.

Alcohol is eliminated from the body in a few hours, but THC stays in the body for weeks, possibly months, depending on the length and intensity of usage.

THC damages the immune system. Alcohol does not.

There is no intention here to minimize the dangers of alcohol abuse, which can be equally harmful. Users, however, need to be aware that the chemicals in marijuana, some of them cancer-causing, remain in the body long after the drug is taken.

THE TRUTH ABOUT MARIJUANA

The Truth About Marijuana

Find out what the marijuana pushers would hate for you to learn. Get the facts.

Request your free copy of the booklet, The Truth About Marijuana