One day a few years ago, the assistant warden of the Hernando County Correctional Institution for Women in Florida stopped to get her hair done at a local salon. Her hairstylist, she soon learned, was a dedicated volunteer with the Florida chapter of Foundation for a Drug-Free World and its worldwide Truth About Drugs program. The warden left the salon not only with a haircut but a Truth About Drugs DVD, which she turned over to her education director, Andre Buford.

Shortly thereafter, the assistant warden and Buford attended a Hernando County School Board meeting where the full Truth About Drugs program was presented—the videos, the booklets on each commonly used drug, and a full curriculum for use in any classroom setting. Fifteen minutes into the presentation, Buford knew he had found the perfect program for the women in his prison. Mexico’s drug cartels hold a firm grip on the lucrative U.S. drug trade, controlling 70% of all drugs trafficked into the U.S. and over 90% of the cocaine trade. Each year, more than 8,000 kids under 18 are recruited into the cartels—many as young as 10 or 12 years old. And it’s not rare for a child of 10 to use cannabis and quickly progress to harder drugs. While Mexican police forces say they are powerless to keep the kids from slipping into the drug world, Mexico’s Drug-Free World Association is dedicated to forging partnerships with government and law enforcement to do something about this national crisis.

Teachers Impart
THE TRUTH ABOUT DRUGS

Teacher, Illinois, USA
“Since drugs are prevalent in this neighborhood, many of my students have family members who sell or use drugs. They also walk by sellers on the corner daily and it is good for the students to see and hear about the realities of drug use instead of just the ‘cool’ message of drug use they get from the streets. I see a change in my students after viewing the DVD, especially that maybe drugs are all about dollars and not in their best interest. In their essays they write about how they don’t want to end up like people they know who are addicted, and I believe the materials in the Truth About Drugs curriculum helped them realize that.”

“My students now have an awareness and change I have not seen from any other program I have used.”

REACHING KIDS BEFORE DRUGS DO

The Truth About Drugs program uses many channels to reach kids before drugs do.

Booklets In the past year, over 7 million booklets were placed in people’s hands.

TV In the past year, Public Service Announcements aired to over 83 million viewers.

Online In the past year, visits to drugfreeworld.org doubled to over 14 million.

The not at all “Smart Drugs”—brand-name or generic amphetamines such as Concerta, Adderall and Modafinil, are abused by some teens who think the drugs will help them get through exams. Wrong, say university studies. Abuse of these prescription stimulants is most prevalent among underperforming students who hope to improve their grades through drugs. However, a University of Pennsylvania study found that those who took stimulants showed no performance gains on a series of tests that measured factors such as creative working memory. The users only thought the drug was helping them, while in fact it was found in some to reduce performance. A Drexel University study found that users of these drugs risk long-term impairment of brain function.

Support the Foundation for a Drug-Free World and help protect young lives from the destructive effects of drugs. Your contributions enable us to make our educational materials available free of charge to schools, youth organizations and other groups and individuals. Your support helps empower people with the facts they need to live healthy, drug‑free lives. 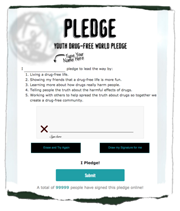